The moon is at 25 degrees Taurus – taurus is about persevering, endurance, patience, strength of will…the feminine “I Have” of the zodiac, she is fixed earth and we mean REALLY fixed…slow to get moving but impossible to stop.  Ruled by the planet Venus, Taurus is about surrounding herself with beauty, but she’s often far too dependent on material security.  My mother who was what I saw as the epitome of the Taurus energy was driven by financial security so she never had to depend on a man to give her what she wanted or needed..she was the strongest, yet probably the loneliest woman I ever knew.  In the 5th house, the house of the expression of our inner self, the natural urge to create new life..creativity as an expression of emotions, sexuality as a creative act!  You will see why this is significant later.

Today in the Hebrew calendar is the 14th of Kislev – the number 10 – “we give account”..Kislev is the month of the festival of lights and the parable of gathering enough oil for the winter months.   Kislev’s letter is Gimel (the camel which reminds me of the phrase which essentially meant  it was easier for a camel to go through the eye of a needle than for a rich man that held tightly to his riches to walk in faith, which represents the power of the planet Jupiter and symbolizes abundance, prosperity of all kinds and good luck.   As we know, the year is divided into four seasons and each season represents a different element. The autumn, a combination of Tishrei (Libra), Heshvan (Scorpion) and Kislev (Sagittarius), belongs to the Air element. The Air element represents a state of balance, thought and logic: in Kabbalistic language, “Central Column”  Central column energies include Kether daath, Tipareth, Yesod and Malkuth….crown, knowledge, beauty, foundation and Malkuth.  Cebtral Column (receiving in order to give) is very strong. The Zohar also teaches us that the rainbow symbolizes the power of The Central Column, of balance, and the path that we will be exploring today is the upper section of the central column.

The path of Gimel is the 13th path and the Thoth Tarot card, the High Priestess from Kether to Tipareth.  The 13th path connects the higher frequency of the upper triad and the light that is contained therein with the lower spheres… The High Priestess represents the deeper, more subtile aspect of the female archetype – the darkness, the mystery, psychic power, the might of the moon to enlighten the subconscious….she’s the great virgin but she exudes desire and sensuality. 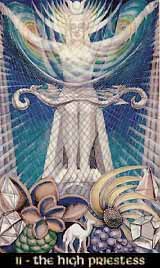 Duquette  states that we are satisfied to know that the Priestess represents the moon in her higher aspect   that joins the human to the divine…and the only thing that separates us from the divine is that thin veil, she is herself Spiritual Purity, untouched by the things of the world, and in many ways, since a great deal of what we hear in the media today is either about some scandalous superstar or murder and mayhem, we should be mindful also to not be driven down the wrong rabbit hole.

The card for the day is the 7 of cups.

The Sphere of Destination is Kether, the Crown.

The Hebrew Divine name is Eheieh, God the Creator.

The Archangel is Metatron.

The Order of Angels are the Chayoth Ha Qadesh, or, the Order of Seraphim.

There is no corresponding planet.

Tarot correspondences are the four Aces.

The color is brilliance, pure white with specs of gold and silver.

Symbols are the crown, the point and the swastika.

The Magical Image is an ancient bearded king who can only be seen in profile.

The spiritual vision is Union with God.

It is called by the titles, “Existence of the Existence,” “Concealed of the Concealed,” “Ancient of the Ancients” and “The Primordial Point.”

A mythological and religious correspondent is the Hindu God Brahma, always shown with two faces, one looking forward and one away, that we may only see one at a time.

We commence our journey in the Sphere of Tiphareth, Beauty.

The Hebrew Divine Name is Jehovah Aloah Va Daath. (have)

The Archangel of the Sphere is Raphael.

The Choir of Angels is the Malachim or Angelic Kings.

It is called the Mediating Intelligence.

The Planetary correspondence is the Sun.

It is symbolized by a vision of Universal Harmony.

The color is a bright, golden yellow.

The magical images are a Majestic King, a Child and the Sacrificed God.

The stones are topaz and diamond.

The metal is gold.

The musical note is “F.”

Symbols are the truncated pyramid and the cube.

Mythological and religous correspondences to Tipareth include Jesus, the Christ, The Buddha, the Egyptian God Osirus and the Greek God Apollo.

Which name you use in your meditation depends upon whether you are exploring from lower spheres to the top in whcih case you would use the lower, or the upper spheres to the bottom… When Shambala did the chakra meditations, I found that the experience had a greater impact on me personally, when we began at the crown and moved our way down… one direction is called the Flaming Sword and the other The Serpent of Wisdom.

The 13th Path is known as the Uniting Intelligence because it is itself the Essence of Glory and the consummation of Truth.

The Hebrew letter for the path is Gimel, meaning Camel.

The planetary influence on the path is the Moon.

The corresponding Tarot Major Arcanum card is the High Priestess.

The elements on the path are water and spirit.

The symbol is the virgin, she who is the repository of unblemished cosmic memory.

The stone is moonstone, pearl or crystal.

The scent is jasmine.

The color is blue.

The mystical experience is a vision of light.

The card for the day is the 7 of cups (have)

Areas the 13th Path will help you:

Grounding, yet elevating your consciousness at the same time

Enhancement of your feeling nature

Becoming more objective to yourself and others

Being able to remain open without pain

Increasing the healing energy in your hands

Accepting yourself as part of God, and therefore good and worthy

Increasing your ability to feel and perceive energy

Being able to release yourself, altering your consciousness as you might do through drugs, but achieving this state without them

The ability to manifest your thoughts more quickly

Recalling past issues so that you can lay them to rest; understanding the past

Improving your ability to project your thoughts; empowerment leading to fulfillment

Acquiring a desire to help, heal, and serve others, even at the risk of losing your hard earned balance; gaining the ability for self-sacrifice, to others or to a higher cause

Teaching ability; being able to share your “peace” with others

Being protected and being able to protect others

Omniscience; recognizing your link to all things

Opening and balancing all of your chakras

Releasing the flow of the kundalini force within you

The musical note is the “G#.”…G is Sol which is the 741 HZ on the solfeggio scale

But as with all instances of new and full moons, you should first determine where the moon transits your chart and discern from there what areas of your life may be positively altered and what you should be contemplating doing to bring that about.

“What we recognize as ourselves—the entity that laughs and weeps, that stubs its toes, falls in love, wins and loses, lives and dies—is not a true reflection of ourselves.”Jennifer shippee

What IS a true reflection of yourself…is entirely UP TO YOU!