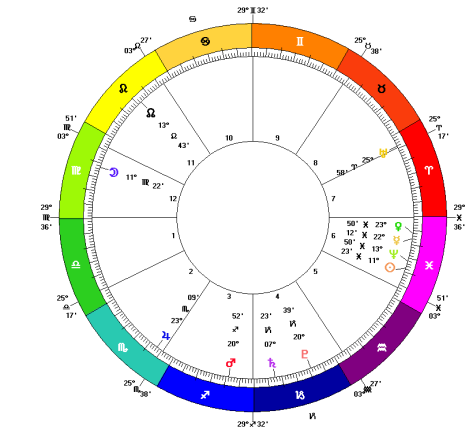 Welcome to the Full Moon in Virgo which waxed at 7:51 PM EST.  The Moon, which represents our instincts, habit patterns, and unconscious drives, shapes our innermost fears, desires, and loves in the sign of Virgo, feminine mutable earth, the sign of work ruled by Mercury the ancient god of communication, commerce, rules and intelligent reason.  Intelligent reason is logic, and common sense and I’m typically amazed at how many lack good common sense, but for Virgo, this analytical gift is internal, for the self, not for judging a lack thereof in others.  The sign of the glyph of the virgin, often considered shy and a little naïve, but maybe the quiet shyness is actually modesty shielding an inert sense of shrewdness using the shyness for it’s own good.  All throughout the history of women in general, we were typically taught by society to act a certain way in order to achieve a particular goal; we’re taught that men shy away from strength and independence as they often need to feel needed and protective, we’re taught to dummy ourselves down so as not to seem so much smarter than the male so as not to bruise his delicate ego.  With 12th house energies, our inner psychology plays a huge part in how this Moon affects us.  But instead of calling Virgo the sign of work, I’m leaning more on the sign of “what works.”

Aspecting this Full Moon is of course the opposition with the Sun, and Neptune, square with Mars, and the  trine with Saturn, and Pluto.

The opposition acts as a proverbial tug of war as the planets involved struggle for expression; with the Sun and the Moon, it’s our emotional selves with our egoic or logical self, but Virgo quiets the emotional self just a big and teeters along the side of logic and reason.  Neptune sits with the Sun and clears the rose colored glasses just a bit so that we can begin to see with our instincts.  I used to hear a lot that things done in the dark always come to light, and if we pay close enough attention, we always get the answers we seek.  I had occasion to sign up for an on-line dating site few months back and there were a couple of gentlemen that peaked my interest, people always put their best foot forward, but little by little, any skeletons that are there always come out.   Pisces is the I believe sign of the zodiac and is receptive and intuitive, so sitting back and just listening actually gives both the Sun and the Moon their desired expression,

The square is an aspect of tension and creates a certain amount of stress which can be used to get things moving. Mars is the planet of action; lets gather all of the information before we let Mars energy get us jumping up and down, but if we need to run, RUN.  Mars in the 3rd house has a relentless drive for knowledge and following leads…pay attention to that inner voice.

The trine is said to be an aspect of comfort and good fortune.  But Saturn is the planet of limitations and responsibility.  The trine with this Full Moon helps us manage anything we need to do because of Saturn’s strong discipline.  Pluto is also included in this trine with Saturn, and Pluto is the planet of transformation and extremes offering true insight helping us to see how the past directly affects where we are.

The north node is still in Leo and is in the 11th house.  For me, that says, it’s ok to be a loner; hold out for the right kind alliance – who was it that said you have to kiss a lot of frogs to find your prince.  We set ourselves up for failure if we imagine that those around us can or will conform to our idea of who they should be, so, we have to learn to see people for who they are, rather than who we want them to be.

Today in the Hebrew is the 17th of the month of Adar, and the first day of Purim, the festival that celebrates the people from being saved from a plot to destroy and kill.  By the way, I deleted my on-line profile on that dating web-site and I had this sense that both of the people that I met weren’t forthcoming about who they really were – one I caught a glimpse of the person he was hiding in the spirit, and the other, who said he was an empath, had a fetish for causing pain – how does that relate?  But I’m just using them as examples here to show how we sometimes need to sit quietly and let the universe give us the information we need to see things as they are, because it’s very easy to only look at the surface of things and miss a detail that you could later seriously regret missing.

Kabbalah teaches that the month of Adar has qualities of all of the other signs just as the sphere of Malkuth carries a certain amount of light from all of the spheres on the Tree of Life.  The winter months are also governed by the last Hei in the Tetragrammaton which symbolizes our world as the vessel that receives and accumulates the spiritual abundance from the higher or upper worlds.  Pisces is central column energy flowing directly along from the crown to the hidden sphere of da-ath, Tiphareth, Yesod and Malkuth.  Today would be an excellent time to perform the Middle Pillar ritual, and I’ll place a link below for that, if you’re of a mind to do that.

The month of Adar was created by the letter Kof or Qoph.  The letter Kof, symbolically represents, among other things, the eye of the needle, and according to walkingkabbalah.com has to do with the requirement of removing the husk of the superficial to reveal holiness within – so more of seeing things as they are.  In Hebrew, Kof means monkey, a creature which, in many ways, resembles a human, but on the inside is purely animalistic.  He can be trained to mimic human, but in the end, his animal instincts will always prevail. The Kof extends both above and below the line indicating its ability to descend into the lower world and also the ability to ascend into the higher so it’s reminiscent of being able to see and be in both worlds.

The letter Kof represents the Moon card in the Thoth Tarot and the 29th Path on the Kabbalistic tree of life connecting Netzhach (victory) with Malkuth (kingdom). 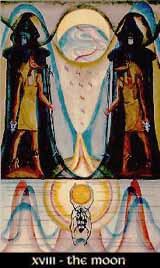 “Let the Illusion of the World pass over thee unheeded, as thou goest from the Midnight to the Morning.” DuQuette, Lon Milo. Understanding Aleister Crowley’s Thoth Tarot (p. 146). Red Wheel Weiser. Kindle Edition.

This card reminds me of the rhythms of life, from darkness to light and back to darkness, above and below and all that life touches in between, dream state and wakened, and the information our brain passes back and forth between the two.

“Whatever horrors may afflict the soul, whatever abominations may excite the loathing of the heart, whatever terrors may assail the mind, the answer is the same at every stage: “How splendid is the Adventure!” “  DuQuette, Lon Milo. Understanding Aleister Crowley’s Thoth Tarot (p. 147). Red Wheel Weiser. Kindle Edition.

Which tells me that regardless of what I found out about those two gentlemen, realizing the process, despite how scary it may have been to see what I saw, learning to use the skill and seeing it in action, and acknowledging what it is, was amazing.

The sphere of Netzhach is related to the planet Venus in your chart and governs pleasure, and generates the mechanism of repetition and reproduction, like seeing the same number sequences in your life that give you a certain sense of something, or that you link or connect with a particular event in your life.  The sphere of Malkuth is related to your ascendant sign and is the path you chose to walk in this lifetime and encompasses your entire physical creation.  Each sphere embodies one particular aspect of God during the act of creation and by virtue of you being a physical manifestation of that essence, the act of creation continues with you. One might say here, to govern yourself accordingly.

The Archangel is Sandalphon.

Its colors are all shadowed natural hues.

The Tarot correspondences are the four Ten’s and the Princesses or Pages.

Corresponding body parts are the base of the spine and the feet.

The Sphere of Destination is Netzach, Victory.

The Tarot correspondences are the four Seven’s.

The color is green.

The 29th Path is known as the Corporeal Intelligence, because it forms every body which is formed beneath the whole set of worlds and the increment of them.

The Hebrew letter for the path is Qoph, which means “back of the head.” The simple meaning of Qoph is “sleep.”

The symbols of the 29th Path are the magic mirror, the doe, the crayfish and the beetle.

The color is crimson.

The musical note is “B.”

Living beings are the dog, the wolf, a huntress and elemental beings of our own creation.

Mythological correspondences include the Greek Hecate, Goddess of both the underworld and the overworld, Artemis, Greek Godess of the hunt and childbirth and Diana, her Roman counterpart, as well as the Egyptian Anubis, God of the underworld and resurrection.

Areas the 29th Path will help you:

Understanding reincarnation and that life does not end, but only changes form.

The ability to revisit past lives, and to find your “roots.”

The ability to perceive cycles.

Understanding unity and the “group mind.” Gaining a feeling of belonging, and of “being home.”

Allowing self-recognition that you are wanted and loved by the Universal Mother.

Spreading harmony among others.

Further stimulation of the Third eye.

Increasing your ability to drop resistance and “go with the flow.”

Confronting your fears and understanding that they are nothing more than a reflection of yourself, created by you.

Being in touch with your own body and its needs.

Knowing that you are responsible for creating and maintaining your own body.

I must apologize, this Full Moon caught me a bit off guard as I thought it was tomorrow.  I had a diary reminder set to sit down and do this writing and when I looked it up I realized the Full Moon was today…therefore I didn’t have time to do the pathworking recording.  In lieu of that, I might suggest the Middle Pillar ritual.  I am also including a copy of the section of the Book, Scrying on the Tree of Life,  which includes the Path of Qoph.